We are proud to recognize Co-Founder and Managing Director Gretchen Frary Seay who is a finalist for D CEO and the Association for Corporate Growth’s 2020 Mergers and Acquisitions Awards. Gretchen is among the finalists for Deal Maker of the Year in recognition of her contributions to M&A activity in the Dallas area, nationally, and internationally. In 2019, Gretchen advised on several M&A transactions and contributed immensely to the investment banking industry as a whole. She specializes in Big Data and Analytics with experience in professional services, software, and technology.

“This is a great honor for Clearsight and me.  Each deal we do is a great team effort, so the recognition goes to our entire team as well!” Gretchen remarked after being named as a finalist.

In addition to heading the Clearsight Dallas office, Gretchen is involved in a number of professional organizations across Texas. She is on the board of TexChange Dallas, a network of technology entrepreneurs that brings executives together to share their lessons learned. She also sits on the UT Austin McCombs School Advisory Council.

Gretchen will be featured in the May issue of D CEO Magazine after winners are announced on April 30th. We are fortunate to have Gretchen as a member of the Clearsight team and look forward to her continued success and recognition for her contributions and unwavering dedication to her clients.

If you would like to contact Gretchen to discuss her work, she can be reached at gseay@clearsightadvisors.com. 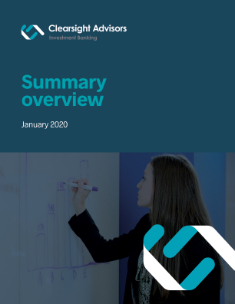